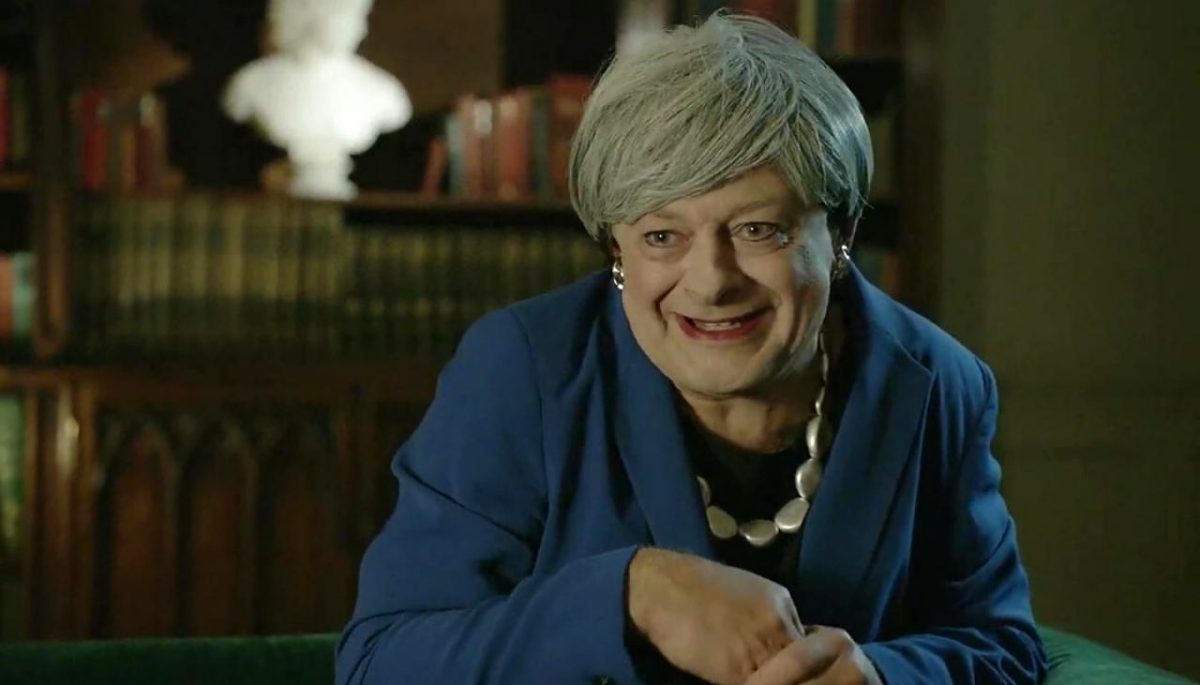 I dunno about you, I feel like I’ve been away a long time. I was beginning to feel a semblance of happiness before I committed to staring down this week’s ‘amusing’ news. But with my mental wellbeing returned to a satisfactorily trudging internal scowl, let’s dive in.

If Theresa May just released a statement that consisted solely of her crying into a plush teddy of Winston Churchill, it would be the 3rd or 4th most embarrassing thing she’d done this week. Basically, her Brexit deal couldn’t be more uncertain if Erwin Schrödinger wrote it. Actor Andy Serkis released a video of him impersonating her uncannily while Golluming it up. It says a lot about the opposition that the left wing’s main political weapon is the Gollum voice. If Theresa is Gollum, I thought it may be fun to imagine which Lord of the Rings characters each big political player best fits.

Boris Johnson– Saruman: An overambitious white-haired manipulator willing to sacrifice others for his benefit.

Jeremy Corbyn- Denethor the steward of Gondor: A complacent leader who represents those who will be affected first and worst refusing to act.

Nicola Sturgeon- Elrond: A leader who just says f*** this and tries to take their people and escape.

Tommy Robinson- That orc that says ‘looks like meat’s back on the menu boys’.

Apparently, I’m A Celebrity Get Me Out of Here is still going and Harry Redknapp won it. In a heartwarming scene in which the melted thug from the end of Robocop accepted the crown, he became the show’s oldest winner. He beat out human Glee episode John Barrowman and Emily Atack, the person who most sounds like a line from a Pokémon game. Redknapp was the favourite throughout the competition due to his ‘idiosyncrasies and little catchphrases’. Essentially, he scratched a cockney itch that we’ve had since Delboy’s age got a bit sad. This series was presented by Hol and Dec which sounds more like a maker of chainsaws than a presenting duo. Ant McPartlin is still on the road to recovery. One road we hope he doesn’t veer off into a child.

Noel Edmonds was also featured in this series but the public voted him off first. Someone famous for offering desperate people terrible deals who is rejected by the majority… now, where have we heard that before? I can’t be sure but it certainly rhymes with ‘banker’.

As some may have noticed (and many may have welcomed), the frequency of these columns has drastically decreased. This is due to the lesser amounts of spare time I have to produce them. The ‘tweak’ I refer to in the title, therefore, refers to my refreshed commitment to producing AWIMA every TWO weeks. I’ll still be as bitter, still as unreasonable and still as irascible. Just less often. And if this news is sombre to you, just remember: we live in a country where the person in the highest office doesn’t need to stick to anything they say day-to-day. And if the PM can do it, a 2nd rate blogger from Cumbria certainly can.

For the rest of the AWIMA catalogue, punch this link and work backwards. And feel free to attack me on Twitter @Mcfadgy.

Big Brexit I'm a Celeb Lord of the Rings Theresa May