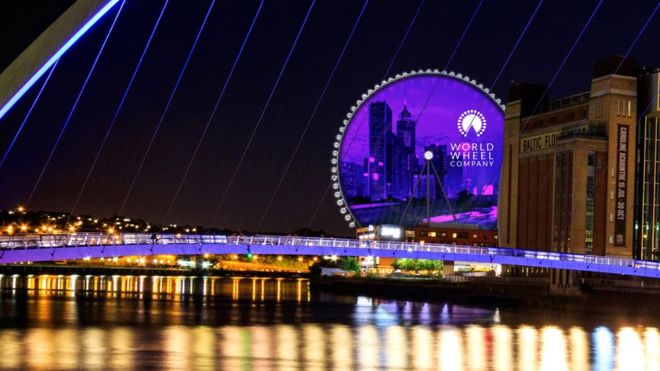 Plans to build Europe’s biggest observation wheel on the banks of the Tyne in Newcastle have been revealed. The “Whey aye” would be 140 metres tall. That’s 5 metres taller than the London eye. So take that, the south. You may have increased funding for education, housing and employment but our hypothetical wheel is bigger than yours. Honestly, it’ll be refreshing to see any building site in Newcastle that isn’t just more student accommodation. The wheel could accommodate 800,00 visitors in its first year. With that rising to around 1.2 Billion if they decide to stay open till 5am on a Friday night. Provided they let you bring your kebab on with you. The World Wheel Company is submitting a planning application later this year. The main take-away from that sentence being that there’s apparently a World Wheel Company. That’s surely the most unimaginatively named company since the invention of the wh… oh I guess that makes sense.

Defence secretary Gavin Williamson says the UK must be ready to counter “intensifying threats” emerging from space. Presumably because he just got round to watching The Force Awakens. Williamson said he would boost staff by a fifth to around 600. He has, as of yet, not commented on whether any of this staff will be oil-drillers in case we need to blow up an asteroid. The UK will also be considering  an alternative system to the EU’s Galileo satellite programme after they blocked us out citing security concerns. That’s a bit depressing isn’t it? A UK version of the shiny Galileo programme? Who are we going to name ours after? Our most recognised physicist post-Hawking is Brian Cox. Although, come to think of, post-Brexit, the UK Cox programme does seem an apt name.

EU must be choking

Speaking of the EU, they’re taking Britain to court for its long-standing failure to meet limits on nitrogen dioxide. It’s the first time the EU has asked Britain to clear the air that didn’t just involve Donald Tusk shaking his head in disbelief while Theresa looks sheepishly at her feet. It’s not just us though. Germany, France, Italy, Romania and Hungary will also be in the dock with us for breaching pollution levels. Maybe we can share lifts. While this will probably the cost the UK millions of pounds, I think we should cherish it. Brexit will mark the point at which the Tories no longer face this scrutiny and can happily proceed to ignore a problem that’s linked to 50,000 British deaths a year. We all laughed at Theresa’s on-stage coughing fit. Give it 5 years and we’ll be the ones retching blood while she sits content in her vacuum-sealed biodome.

Apparently, we’re all eating at the wrong time for our body clocks. Research suggests that eating most of our day’s calories in the morning is the best way to stay healthy. Considering Nando’s doesn’t open till 11.30AM I find this advice impractical. Dr Gerda Pot recommends the old saying ‘eat breakfast like a king, lunch like a prince and dinner like a pauper’. Happily though, this old proverb mentions nothing about cheeky Dominos orders at 1am. Also, breakfast like a king is an odd phrase. The closest to one of those we’ve got is Prince Phillip. So eating breakfsat like him, I imagine, would probably involve four spoonfuls of baby-food, a sackful of tablets and getting tucked back in for a morning nap.

Nanoparticles derived from tea leaves can ‘destroy lung cancer cells’ according to scientists who discovered this ‘accidentally’. So, like the good reporter I am, I’ll helpfully reduce any nuance or subtlety to simply: Drinking tea cures cancer. Has anyone checked this team weren’t all my Nan in disguise? I remember learning about disease fighting T-cells in sixth-form biology. I had no idea it was so literal. It’s a shame this research came out after the finale of Breaking Bad. I’d have loved to have seen the sixth season Walter White turn his talents to working for Typhoo.