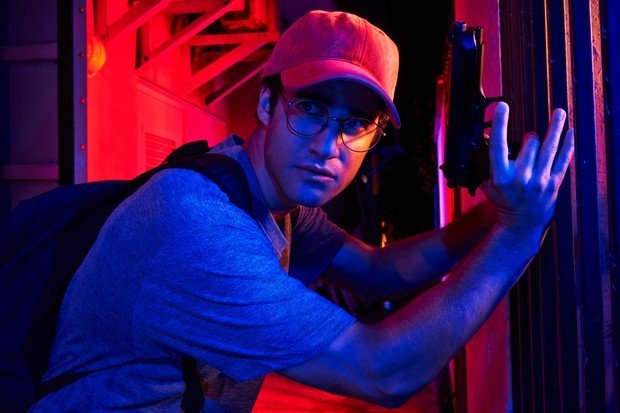 A story about the death of an icon, Gianni Versace’s assassination remains very much within living memory. His distinctive brand lives on today, and the circumstances around his death have once again been brought to life in Ryan Murphy’s adaptation: American Crime Story: The Assassination of Gianni Versace (ASGV). It has already  been broadcast on BBC, but is it worth watching on iPlayer?

It begins on the morning of the fashion mogul’s death, as Gianni Versace wakes up in his mansion on Miami beachfront. Scenes of his lavish life are contrasted with those of his murderer, Andrew Cunnanan, who sits by the shore and picks a copy of The Man who was Vogue from his bag, followed by a gun. His instability and isolation become clear when he enters the sea and screams, the sound silenced by the ocean. He murders Versace on the front steps to his mansion. The story then delves into Cunnanan’s past, uncovering his relationships, work in male escorting and childhood, all of which paint a picture that makes sense of the of the sociopath we’re presented with.

The People vs. OJ Simpson (PVOJ) covers the infamously drawn out, high-profile murder case of Nicole Brown Simpson; taking place after the death of the famous baseball player’s ex-wife. On there other hand, ASGV is a non-linear timeline of events mostly taking place before Versace’s murder. The plot pinpoints Cunnanan’s various encounters with society’s elite, past murders and life as a homosexual in an intolerant 1990’s America. Both manage to make a bold statement concerning something “bigger and deeper and more disturbing about America” beyond the confines of plot. PVOJ explores racism and prejudice within the LAPD. In ASGV, Jeffrey Trail’s experience of the American military’s “don’t ask don’t tell” policy critiques America’s attitudes towards LGBT citizens, resulting in many being marginalised. Cunnanan’s character rebukes this by committing acts of crime with the intention of being known. He watches with great satisfaction at reports of his crimes on TV.

ASGV  is based on a book called Vulgar Favours, and has been criticised for embellishing the true course of events. This, of course, is a natural result of transcribing the story from paper, so we shouldn’t judge it too harshly on these particular grounds. On the other hand, Penelope Cruz’s depiction of Donatella Versace left something to be desired. When she interacts with Versace’s lover Antonio D’Amico (played by Ricky Martin), it feels unconvincing; her Italian accent was more believable in the appalling Zoolander 2 movie. At one point it’s also suggested that Cunnanan was molested by his father, but there’s nothing to follow it up.

On the other hand, Versace’s decadent empire faces numerous threats, like the public’s response to his homosexuality, and this foreshadows Cunnanan’s underlying hatred; one of it’s best achievements. It all adds to the struggle, bloodshed and heartache surrounding the murder spree. Cunnanan, played by Darren Criss, is essentially the person whom it’s all about. The deceit and lies that embody his life, from lying to his mother about his success, to convincing his ex-lover he’s an accessory to the murder he committed, are played out spectacularly.

With a few tweaks here and there, ASGV could have reached greater heights. Like PVOJ, it’s rather gimcrack in places, but manages to capture the crime to make sense of it.