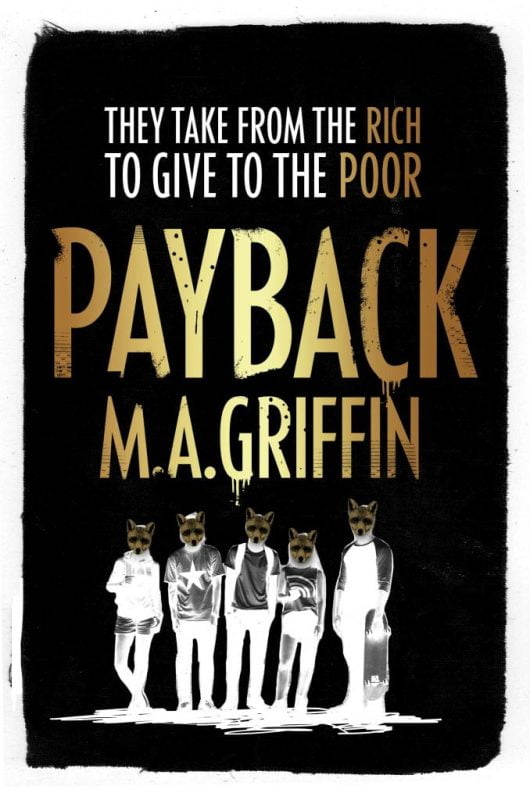 Payback is enigmatic group staffed by teens, has one mission: to steal from the rich and give to the poor. Its dramatic heists create a sensation. But when excitable Payback fan Tom is recruited, he accidentally brings with him a shady money man, Mr Ruiz. And he’s not the
only one on their tail. As the net closes in, the teenagers of Payback fight to stay alive – and true to their values. Being Robin Hood has never been this hard…

Tom is spending his summer holiday being babysat by his older brother Chris until he disappears off to be with his girlfriend. Working in a hotel, he is fired for riding a trolley around in circles on the top-floor corridors – and watching Payback videos – until they break into a hotel room where he works, giving him a bruise when he tries to run and eventually accepting his proposal to join their ranks, replacing their lost fifth member.

But, for Tom, Payback isn’t everything he expected – and the unseen cracks in the group that soon become his family are going to make this a difficult summer.

Taking place over only a brief summer holiday, the restricted time frame of Payback isn’t representative of the freedom its characters portray. Of course, that is probably part of the point. Despite what seems to be their rebellion, nobody in this group is truly free, and neither is the
group itself. But, their thrill does come through – from the moment they realise they are caught, or maybe the moment Tom jumps backwards out of a train, it is heightened, even in comparison to their earlier expeditions.

He takes us with him – first hiding in ventilation shafts, then faking his way through auction security, then in a wild dash through the Scottish moorlands in a desperate attempt to stay free and alive. And it does feel like we are with Tom every step of the way – ultimately he feels Payback is now his family, we almost begin to feel like they are our family, too.
K