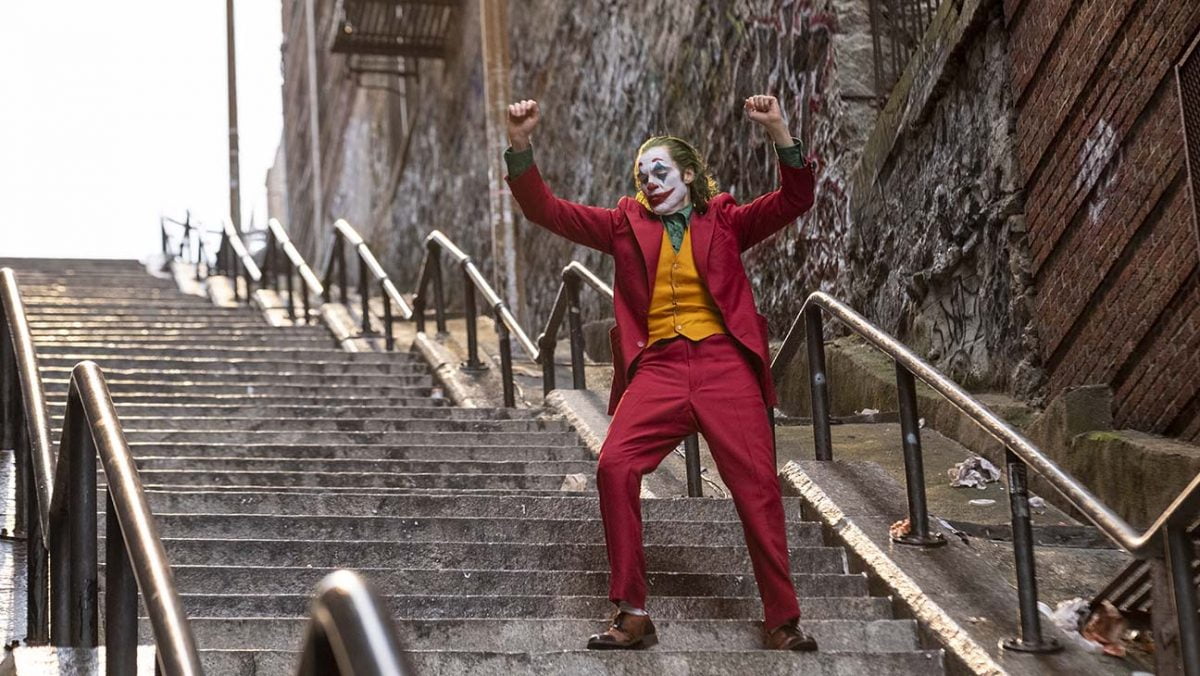 No, you aren’t going to get shot going to watch this film.

Joker is directed by the guy who made The Hangover trilogy and uses that basis to claim comedy is dead. We know Todd. We saw them too. It stars Joaquin Phoenix (a name I will spell once and only once) as Arthur Fleck. The movie chronicles his descent into madness as he slowly becomes somewhat similar to a character in a Batman movie from 2008. But even then, not that similar.

The internet is flush with opinion pieces about this movie. You’re even reading one right now. And to be quite honest, I think I saw a different movie to everyone else.

As far as positives go, you can’t really talk about Joker without acknowledging that Phoenix acts his ruddy socks off. So I will. He’s enrapturing to watch as he paints a full portrait of this deliriously unbalanced lunatic. I like the idea that he could be the second actor to win an Oscar for playing the Joker. Mainly because it would be another funny example of Hollywood pretending Jared Leto didn’t happen.

Everyone else in the film puts in good performances as well. It looks great. The music is good. All the sets look lived-in. The story is interesting if fairly predictable. I will happily report that it is a good movie.

But come on people… really? Before I saw it, all I had heard was that it was either the greatest piece of cinema to be sent down from heaven or it was effectively an act of international terrorism. It would either win every award or cause incels to bomb the White House.

It’s not more or less violent or edgy than any of the other films Martin Scorcese made in the late 70s/early 80s. It’s more or less a reskin of Taxi Driver with a bit of The King of Comedy thrown in. The fact Scorcese is a producer for Joker just further cements that nothing in this film is new. It’s just stuff we’ve all seen before done fairly well.

There’s also the sense that this movie think’s it’s a lot cleverer than it is. It incorporates story elements pointlessly and stupidly but frames them as if they’re surprising. And yes, Todd, I’ve seen Fight Club too. Well done.

As for the idea that it’s a dangerous film to screen, I can’t work that out at all. Sure, it has themes of anarchy and revolution but they aren’t any more prominent than other films featuring the Joker. In fact, I would argue The Dark Knight pushes these ideas more than this does.

Joker is less about anarchy than it is about inadequacies in mental health care. This would be an admirable theme if they could find any sort of consistency in its portrayal of mental illness.

Ultimately I found Joker to be somewhere on the scale of fine to good. It’s the best film I’ve seen this Autumn about an evil clown. But the outrage/hype around it is so grossly exaggerated that I couldn’t help but feel a bit deflated that once you took the big clown shoes off, the actual feet inside were underwhelmingly regular.