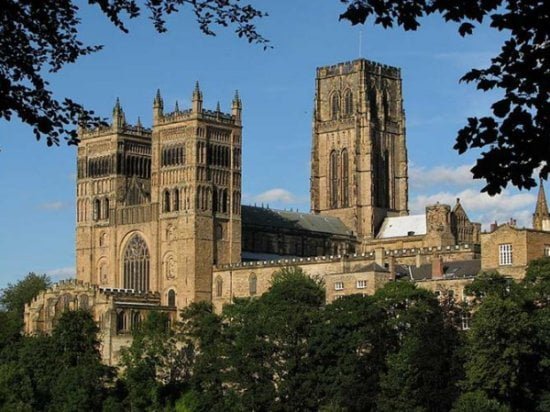 The Cathedral Church of Christ, Blessed Mary the Virgin and St Cuthbert of Durham (Or for those in a rush, Durham Cathedral) is one of the UK’s most recognisable cathedrals. Dominating the Durham skyline, the cathedral provides the people of Durham not only a spiritual boost but an economic one too, bringing over 755,000 visitors to the city in 2015.

The founding of the cathedral dates to the 9th century. This turbulent time in British history saw an increasing threat to the people of the northeast from Viking raids out of Scandinavia. Legend has it that weary of these threats, the monks of the island of Lindisfarne moved decided to remove the remains of the 7th century Bishop St. Cuthbert away from the island to safety on the mainland. The story tells that the monks wandered the countryside until the coffin became too heavy to carry any further. Taking it as a sign from St. Cuthbert that this spot was appropriate, the monks built their new shrine. This spot is where Durham Cathedral stands today.

The cathedral as we see it today was designed by William of Calais, who in 1080 was made the first prince-bishop of Durham by King William the Conqueror. Construction began in 1093 with the High Vault being completed in 1135, 36 years after the death of William of Calais.

During the dissolution in 1538, the tomb of St Cuthbert was destroyed, and his body exhumed (legend says that the body had been found to be perfectly intact, free of any decomposition) on the orders of King Henry VIII and all the wealth of the cathedral was handed over to the royal treasury.

In the 17th century, the cathedral was used by Oliver Cromwell as a prison for Scottish prisoners of war. Cromwell was renowned for his severity, and the prisoners were kept in inhumane conditions. Food, water and heat were in short supply and it is estimated that 1,700 prisoners died in the cathedral as a result. Those who survived were later shipped to the North American colonies and forced into slave labour.

The 1930’s saw the restoration of the tomb of St. Cuthbert and more recently, in 1986, the cathedral was made a UNESCO World Heritage Site with the report stating that the cathedral is “the largest and most perfect monument of Norman style architecture in England.” The cathedral is perhaps best known among today’s younger generation as being the setting for Hogwarts School of Witchcraft and Wizardry in the Harry Potter series of films.