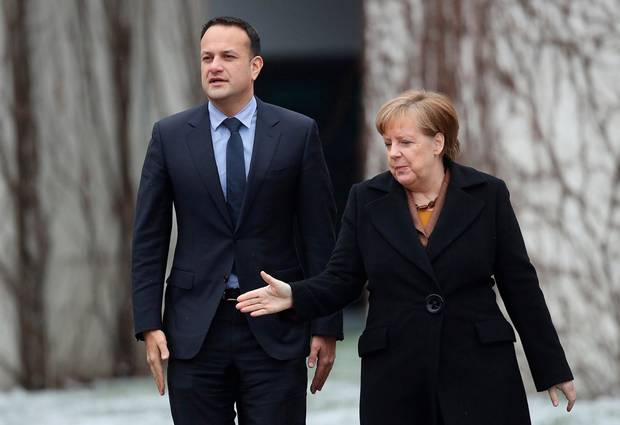 German Chancellor Angela Merkel has said that in the Brexit negotiations, Germany stands with Ireland “every step of the way”.

The revelation comes after Ms Merkel’s talked with Leo Varadka, the Irish prime minister, in Dublin yesterday. It is understood that the talks surrounded the issues with the current Brexit deadlock in Parliament.

One of the main reasons for the deadlock lies with the impossibility of a border between the Republic of Ireland and Northern Ireland, which neither countries want, and which cannot be guaranteed by the EU or Britain if Britain wishes to end freedom of movement. If there is no border between NI and the ROI, the border will have to be somewhere in the sea, which, again, strikes most as completely impractical. A solution to this issue is yet to be found, and the ‘backstop’ in PM Theresa May’s current deal is not satisfactory to hardcore Brexiteer MPs.

When Merkel was asked if it was possible to protect the integrity of the single market without an Irish border, she said: “We will simply have to be able to do this. We hope for a solution we can agree together with Britain.”

Ms Merkel added that she is still hoping “for an orderly Brexit”, and that she hopes MPs this week come together to create a possibility “where Prime Minister Theresa May will have something to table to us on the basis of which we can continue to talk”.

The Irish PM reinforced that he is committed to having no Irish border and frictionless trade with Northern Ireland after Brexit, adding that “we don’t want Ireland to become a back door to the single market in the event of a hard Brexit.”

It remains to be seen what exactly Mrs May will do with regards to Merkel’s statement, seeing as it seems to be an olive branch for renegotiation on an Irish border. But while this may please MPs worried about Ireland, it will only further infuriate Brexiteer MPs, who would see the lack of a border between NI and the Republic as Britain failing to truly leave the European Union.