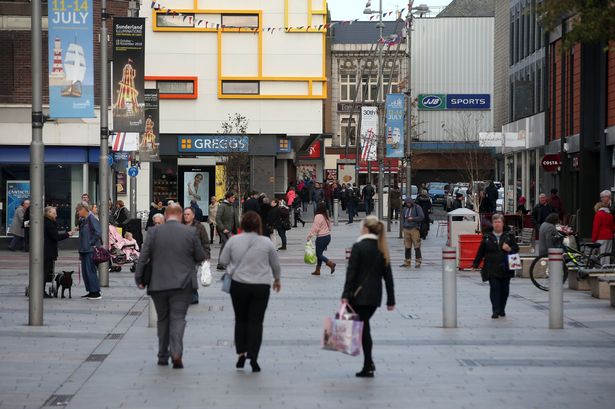 A report published by the University of Warwick, has calculated which areas of the country have won or lost out economically as a result of the Brexit vote.

The report, titled Measuring the Regional Economic Cost of Brexit, has used data and statistics from 2018 to construct a predictive modelling which estimates how the UK’s economy would have grown had the country decided to remain in the European Union.

The study has measured the pre-pandemic regional economic cost of Brexit per capita up to 2019 and from these findings, has divided areas of the country into Brexit ‘Winners’ and ‘Losers’.

Back in 2016, the North East of England voted 58% Leave, more than any other region of the UK. But, despite voting for this outcome overwhelmingly, according to the study, half of the North East’s twelve authorities are Brexit ‘Losers’, three of the regions are winners and the remaining three are classed as neither.

Darlington, which voted 56.18% Leave, is a big Brexit ‘Loser’ and has seen the largest loss of economic activity in the North East and indeed, the entirety of the UK. The estimate suggests the cost of Brexit to Darlington’s economy totalled a loss of £1180.04 million in 2018, which amounts to a whopping £11,073.34 loss per resident, putting Darlington’s Gross Domestic Product (GDP) 20.86% points lower than it would be had the Brexit outcome not amounted to what it was.

Similarly, Redcar and Cleveland, which voted decisively to leave with 66.19%, the highest in the region second only to Hartlepool, is also a Brexit ‘Loser’. The report suggests that in 2018, Brexit cost Redcar and Cleveland’s economy £578.28 million. This equals an annual loss of economic activity of about £4229.70 per resident and estimates the district’s GDP 15.73% points lower than how it would have evolved had it not been for the Brexit vote. 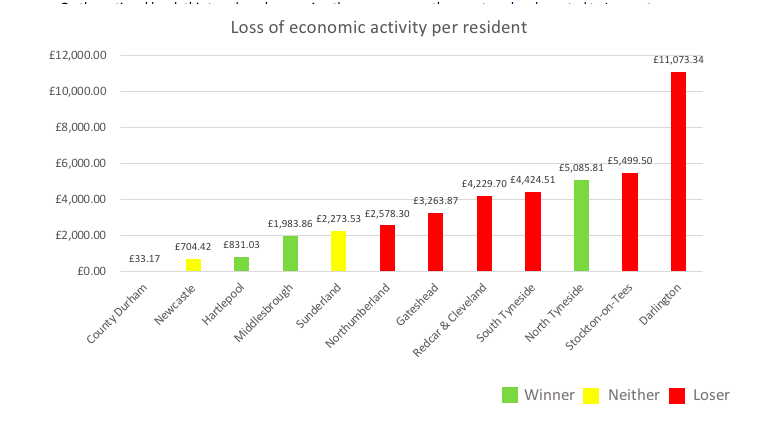 This sizeable loss of economic activity in the North East is due to the region’s significant manufacturing sector which has been hit hard in the years following the vote, by way of chilled foreign direct investment, domestic investment and jobs drift to the continent. The departure from the Customs Union, which will impose extra, burdensome administrative and costs to businesses, most pertinently small and medium-sized businesses will only exacerbate matters further.

With half of the region’s authorities set to lose out, this puts the North East above the national average of this win/lose share, despite being the UK region which voted in favour for Brexit the most. This correlates with wider findings that suggest the Brexit vote will significantly exacerbate regional inequalities.

On the national level, this trend can be seen in other areas across the country who also voted to Leave at a disproportionately higher rate. Boston, Bolsover, East Lindsey, Castle Point and Great Yarmouth, have all been categorised as Brexit ‘Losers’ despite the electorate in every single one of these areas voting to Leave by more than 70%.

For example, Great Yarmouth, whose electorate voted overwhelmingly to leave the European Union, with a whopping 71.5% of residents voting so, the 5th highest in the UK, has already lost out. The report suggests that Great Yarmouth has lost out with a cost to the local economy of £394.62 million in 2018, amounting to a loss of economic activity of about £3,971.20 per resident.

In Kent, in the South East of England, thought of as the spiritual home of UKIP, and in many ways the birthplace of Brexit, 59% of the county’s residents chose to Leave. In Dover, the Gateway to Europe, this number was higher at 62.15%; The study suggests that the Brexit vote has cost Dover’s economy £201.4 million in 2018, with major disruption to ports, roads and the Channel Tunnel expected to further impact the local economy.

In contrast, some areas which voted clearly to Remain have ended up on the more fortunate side of things. Despite only 31.03% of its electorate voting to Leave, Westminster in London, has benefitted from the referendum and gained £11,884.82 per resident which contrasts starkly with Darlington, a Leave area, which has lost £11,073.34 per resident.

Brexit was billed by its frontmen as the way to alleviate the regional inequalities that have plagued British society for decades; This report’s findings suggest that Brexit may in fact, deepen those divides, rather than prove to be the solution.