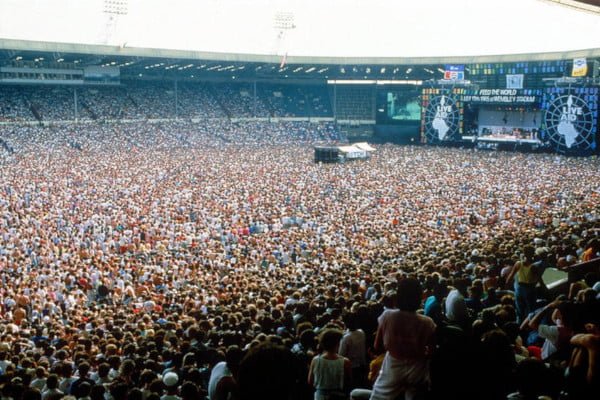 In 1985 came a day in music history that would change live concerts and our expectation of them forever. On this day in 1985, it was time for Live Aid.

Live Aid was organised by musicians Bob Geldof and Midge Urie to raise money for the Ethiopian famine horrifying the world at that time. It was an effort to bring together the best artists and bands of the time (and perhaps of all time) to create a “global jukebox”.

Performances from Status Quo, Sting, Phil Collins, U2, Elton John, Queen and so many more kept a global TV audience of 1.9 billion entertained. There were two parallel concerts – one in Wembley Stadium, London, and one in the John F. Kennedy Stadium, Philadelphia. Wembley was packed with 72,000 fans and JFK had around 100,000 in attendance.

Basically all of the hits of the ’80s were performed in one concert. You had Madonna’s Holiday, Sting’s Every Breath You Take, Summer of ’69 by Bryan Adams, and Bowie’s Heroes all in one day – live.

Although the day intended to raise money for the famine in Ethiopia, it was struggling to convert views to money. However, during the Queen set, donations, according to Geldof, skyrocketed. The show was stolen. Frontman and icon Freddie Mercury had the whole Live Aid audience in the palm of his hands. He was singing with them, they were adoring him, and the atmosphere was electric.

Queen at Live Aid is often referred to as one of the greatest live performances of all time – and they were believed from that moment in 1985 as the best performance at the concert. It’s no wonder it featured heavily in Bohemian Rhapsody, the smash-hit biopic about the band.

Opening with Radio Ga Ga, they had the audience mesmerisingly clapping along and belting out high notes from the beginning of the set. From We Will Rock You to Hammer to Fall and Bohemian Rhapsody, their performance was something else entirely, breaking the richter scale of live music.

So, on this day in 1985, an incredible moment of pop history was made. If you were lucky enough to watch Live Aid – be grateful.