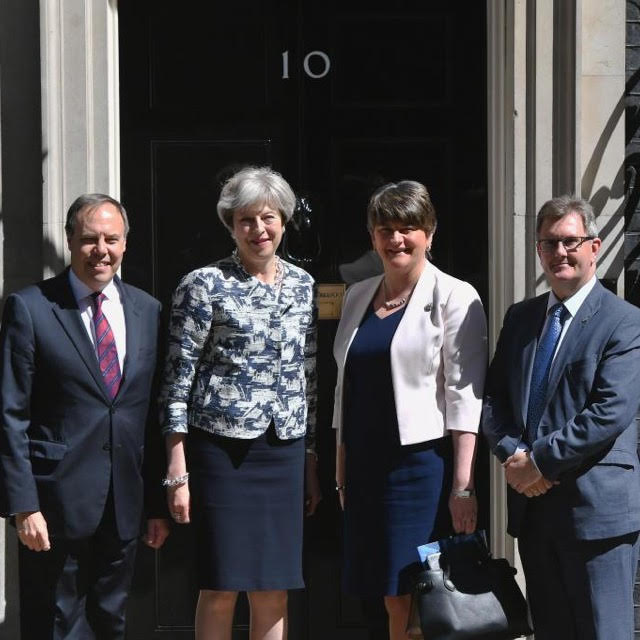 After what seems like an age, the Conservatives have agreed a deal with the Democratic Unionist Party of Northern Ireland. This deal is necessary, as we will all remember, because Prime Minister Theresa May failed to win a majority of 326 seats in the general election. In order to get ‘past the post’ of the jackpot number 326, she needed more seats. The DUP and leader Arlene Forster have agreed to give Mrs May the boost she needs to get over the line, providing ten seats for her.

The deal is different to the one agreed with David Cameron and Nick Clegg in 2010 as this is a ‘confidence and supply’ arrangement. It basically means that the DUP support all of the Conservatives’ legislation on Brexit and security – where the parties were aligned during the election – and are free to vote against other legislation the Tories want to pass.

Who has signed this deal?

Perhaps one of the most interesting things about this deal is that it was signed by the Chief Whips of both parties, meaning that, as Theresa May’s newly-appointed Chief of Staff told ITV’s Robert Peston, if Mrs May was to step down as leader of the Conservatives, it wouldn’t affect the confidence and supply deal with the DUP.

As a result of this, the deal looks more like it is securing the Tories’ position in Downing Street, not Theresa May’s.

Before we get into the nitty gritty of the deal, it has to be said that it must be reviewed after every parliamentary session. This parliamentary session is unlike others as it is two years in length. So, after two years, we can well expect Mrs May (or whoever is then Conservative Party leader) back around the negotiating table with the DUP.

What’s in the deal?

In the deal, as set out in a three-page document published by the government, the DUP have managed to make Theresa May step away from some of her most controversial policies she pledged during the election campaign.

– The triple lock on pensions will be maintained. This means that the basic state pension will rise at least by either a minimum of 2.5%, the rate of inflation or average earnings growth, depending on which is the largest.

– The winter fuel allowance will remain a universal benefit which all those aged 64 and over are entitled to receive.

– Spending on NATO – a commitment made by the UK – will be maintained at 2% of GDP.

– An additional £1 billion will be given to Northern Ireland, making the total amount spent on the region £1.5 billion.