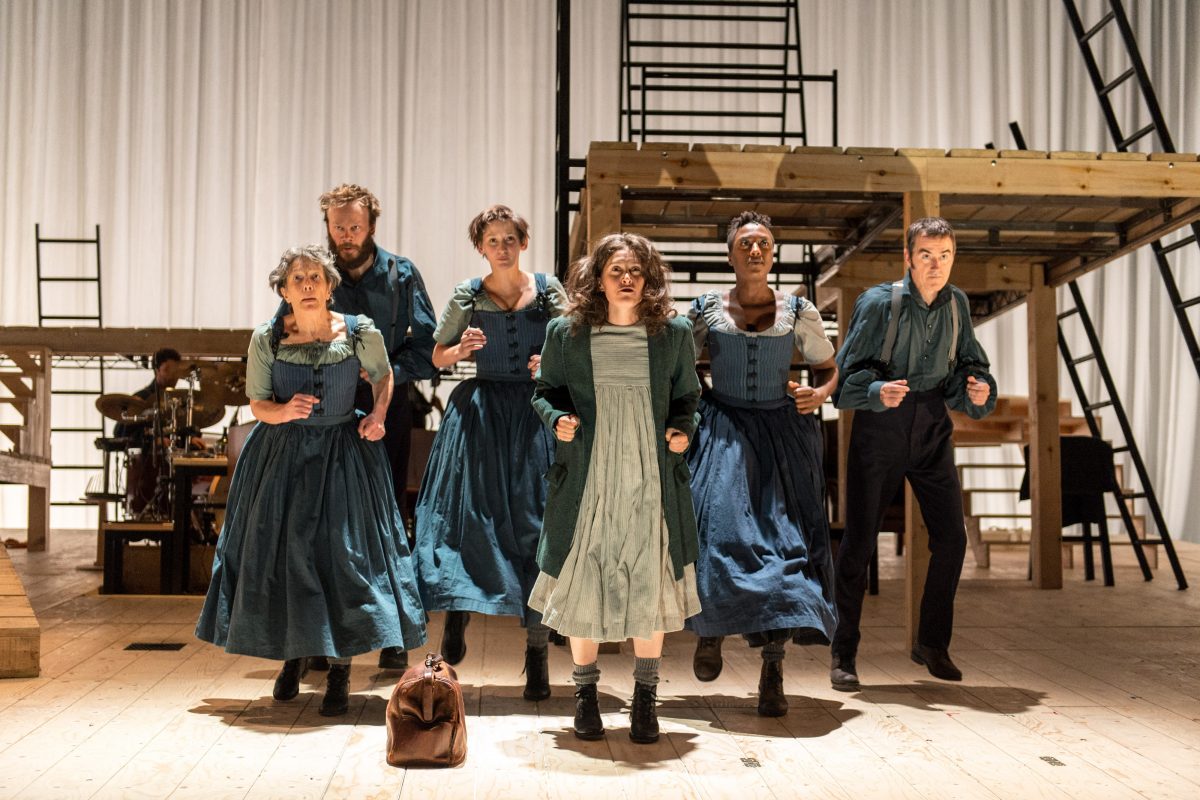 The Charlotte Brontë classic Jane Eyre has seen many film adaptations since its initial publishing in 1847. Perhaps best known is the 2006 BBC adaptation, which won three Emmys and was highly praised for how true it stayed to the original novel. The National Theatre production of the much-loved classic achieved a similar accomplishment, managing in an almost three hour performance to touch on nearly every element of the familiar story.

Nadia Clifford put in a stunning performance as the eponymous heroine, alongside a cast of nine who multi-role as the other characters in Jane’s life. Most notable was Melanie Marshall, who plays a mysterious figure mostly separate from the rest of the cast, visibly represented by her striking red dress much apart from the dull dresses and suits worn by most of the cast. Marshall stood out as the unmistakable voice of the performance, literally, almost narrating the action with what I can genuinely say is the most remarkable voice I have ever had the privilege of hearing in a live performance. It was the musical element of the production, and really those shining, beautiful moments in which we heard Marshall singing, which gave the story the light and excitement necessary to pull off a really engaging play, something which may have been missing as we moved through Jane’s life in what almost felt like real time.

The acting on the part of Clifford and Tim Delap, who played the harsh and impetuous Mr Rochester, was on the whole very strong. However, it was very true to the book, and the book was of course very long. There were times when it felt as though you simply wanted the story to move forward, when you wanted more of the physical elements (when they appeared, these were particularly strong), but it seemed to plunder on tirelessly through Jane’s life, hovering just too long over each period. This was in no place more obvious than in her schooling period, the only point in the play where this detail became almost too tedious. It also felt as though they missed an opportunity to be more violent here, more powerful. Lowood institution was based on the school in which two of Brontë’s sisters died as a result of poor treatment and the poor conditions in their school, a fact of brutality which did not particularly shine through in the play.

It was nonetheless a strong piece of theatre, and did the original story great credit. It felt very much like a piece of what you might call traditional theatre, straying much further from the musical and physical performances we may have grown accustomed to as theatre has grown more visceral and interpretive. This was perhaps to make way for the plot and feeling which comes with the story, but which may actually have been greatly appreciated to bring the highs and lows of the story more acutely to life. The crown jewel of the performance was undoubtedly Marshall, especially her performances of ‘Mad About the Boy’ by Dinah Washington and ‘Crazy’ by Gnarls Barkley. Despite the occasional pitfall, it achieved its apparent purpose. It was a memorable and recognisable re-imagining of a much loved and much told story, which lent itself perhaps surprisingly well to the stage despite its length and depth.