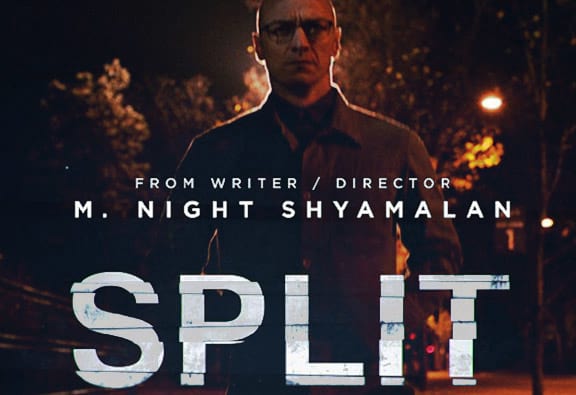 As someone who sees the struggle for mental health awareness and funding parity in their everyday life, I knew that I had to see the new film Split.

Split is based on a man named Kevin with dissociative identity disorder – something many know as multiple personality disorder. Kevin, played by James McAvoy, has 23 different identities, some male, some female, some children, some adult. One of his personalities has a bit of a twist, though – he likes to eat children who are impure. The meaning of impure in this film is someone who has not experienced any pain or trauma in their life, presumably born out of Kevin’s childhood abuse.

The film, written by M. Night Shyamalan, who has had a string of film flops in the recent past, aims to explore the belief that people with DID can have different physical identities, as well as mental ones. For example, one of Kevin’s identities has diabetes while others do not. One of them can also bend metal bars and climb walls like a lizard. Oh, and not to forget the fact that he keeps three teenagers captive, eats one’s stomach, attempts to rape them and eventually kills two of them.

And here we have the crux of the film’s failure.

Shyamalan opted to make this film a thriller-horror hybrid. The issue is that McAvoy’s character is demonised – he’s something to be feared and made a spectacle of on screen. It doesn’t do anything at all to help with mental health stigma – instead it uses it as an interesting new lens for a scary film for teens, many of whom are unaware of the existence of this illness in the first place.

In addition to the appalling representation of people with DID (although they are marvelled at and admired by Kevin’s therapist for being cutting-edge humans, rather than mentally ill), Split pretty much romanticises situations in which people are abused as well as self-abuse. Anya Taylor-Joy, playing Casey Cook – one of the abducted girls – is seen to be sexually abused by her uncle all through her childhood and as a result has self-harmed. Her life at the end of the film is spared because Kevin sees her scars and recognises her suffering.

The idea of making a film about DID or any mental health disorder has so much potential to educate and change the minds of the masses. Split treats those with mental illness as inhuman things to be feared before romanticising a different aspect of mental illness. Its selectivity and insensitivity is disappointing. Hopefully one day someone will get a film from this lens just right.