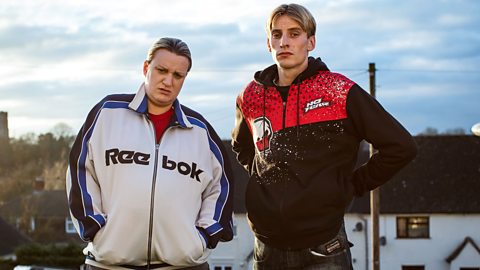 I’ve always watched the British version of The Office and have absolutely loved it. Stephen Merchant was able to bring a completely different medium of comedy to our screens and it’s never really been matched. However, the new BBC mockumentary sitcom This Country came highly recommended to me by my mother and Rotten Tomatoes, and it’s more than exceeded my expectations

Daisy May Cooper and Charlie Cooper haven’t won three Royal Television Awards and two British Academy Television Awards for nothing. When Daisy left her role as a young mother in Doc Martin, she returned to the Westcountry to work in a different profession with Charlie, her younger brother. It was here that these two formed the basis for a mockumentary sitcom, where both would play the same roles as in real life – brother and sister.

From there on, ‘Kerry’ Mucklowe and Lee Mucklowe, also known as ‘Kurtan’ by his hilariously embarrassing trim, were born.

The show follows these two around the small Westcountry village, with regular interviews with the Vicar, Len the neighbour and Kerry’s father, Martin. However, the best character in the show is certainly Sue, Kerry’s mum. Though never appearing on screen, her 20-tabs-per-day voice and all-round deafness give the show a realistic undertone – everyone knows a ‘Kerry’s Mum’.

This Country was released exclusively on BBC iPlayer in the February of 2017, and the show became an instant success with viewers. The resemblance to The Office was uncanny, the awkward camera angles, the similarities between Kurtan and Gareth, and just the laugh-inducing cringe which both shows bathe in that is absolutely nailed.

A very unfortunate circumstance happened with one key character in series one. Michael ‘Slugs’ Slugette, played by Michael Sleggs, unfortunately passed away from a palliative heart failure shortly after the first series was broadcast.

As the TV snob I am, when I look for something to watch I always check its Rotten Tomatoes score, as I’ve wasted many an hour in the past watching paint dry. This series gains an impressive score of 97%, that’s as fresh as classics like Fawlty Towers and Only Fools and Horses!

The show is now heading into its third series, which will air early in 2020. The running time of 30 minutes means that it’s even easier to place on the binge-watch list.