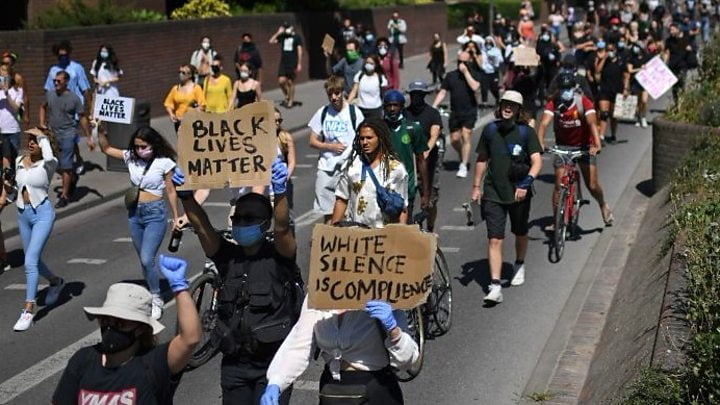 Over the past few days, I have been following the movement and events following George Floyd’s death. I have found myself becoming increasingly passionate about the issue at stake.

For those of you who don’t know, George Floyd was a 46-year-old man, who was brutally killed outside a shop in Minneapolis, Minnesota, after being arrested for suspicion of using a fake $20.

The movement isn’t just about the killing of George Floyd but more the mistreatment and plain racism from the police towards black people. It has been going on for far too long.

As children, we are taught that the police are there to protect us, keep us safe and our communities peaceful. However, it would appear that doesn’t apply to black people.

Upon sharing information, having conversations with people and seeing what people are saying in social media, I’m seeing a lot of people saying, “Why are you getting involved? It’s a US issue.”

Oh, how I wish that was true.

I wish that I could say that racism doesn’t exist in the UK or Europe, but I would be lying. I wish I could say the people who are meant to protect us weren’t racist. It may not be as obvious, you may not be hearing about it in the same way – but it exists and needs to end.

In the UK if you are black you are 40% more likely to be stopped and searched, now I don’t know about you but I don’t like that statistic.

As bad as it is I’m sure you’re thinking, “but our police haven’t killed anyone,” and I’m sorry to break it to you but you would be wrong, we have our own George Floyds.

In the summer of 2008, a black man named Sean Rigg was in the midst of a mental health crisis outside Brixton Police Station, when multiple police piled on his defenceless body, effectively killing him. No one was convicted for his murder. (https://www.bbc.co.uk/news/uk-england-london-46946093)

On the 11th January 2016 Sarah Reed, a black woman, was found dead in her cell at Holloway Prison, North London. She had been sexually assaulted whilst held under the mental health act and was beaten to death. (https://www.google.co.uk/amp/s/www.bbc.co.uk/news/amp/uk-england-london-35481787)

And the list could go on. Just because you don’t hear about it doesn’t mean it doesn’t happen and I think it’s time this racist brutality comes to an end; and the first step to that is to take responsibility for the fact that through this dismissive attitude and silence we are taking the side of the oppressor. As Elie Weisal once said, “let us remember: what hurts the victim most is not the cruelty of the oppressor but the silence of the bystander.”

I hope you can see that, unless we do someone and change our dismissive attitude then, then we are guilty.

This story was contributed by Sophia D, a student at St Thomas More school in Gateshead.