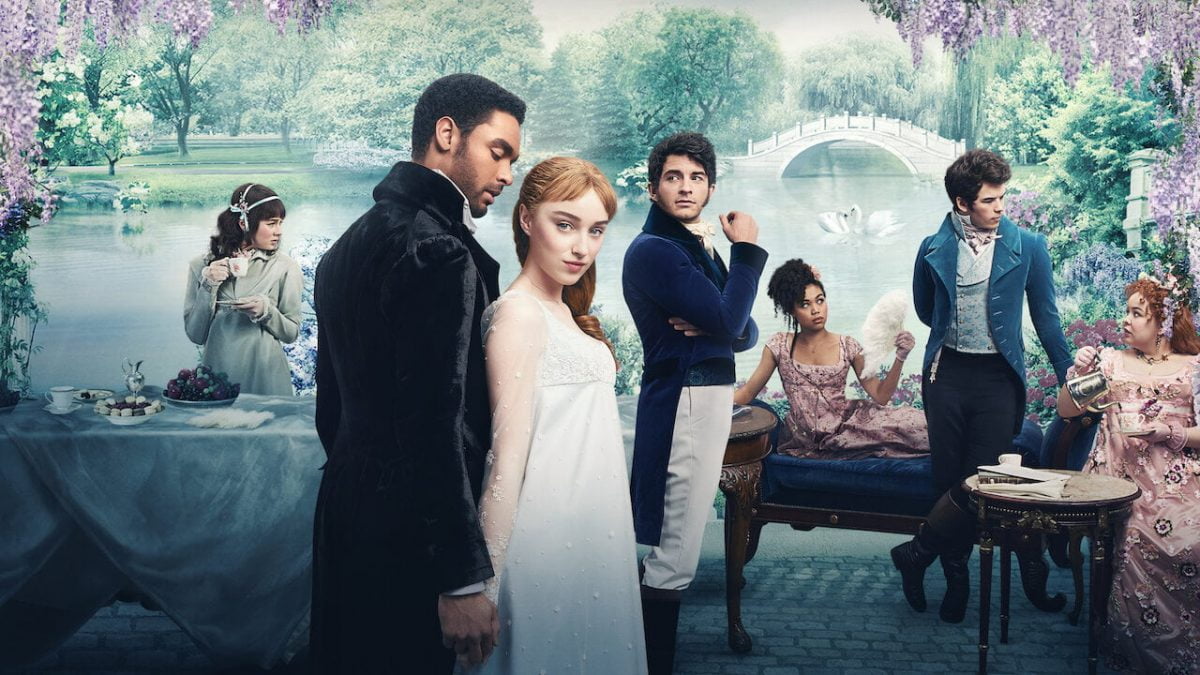 I give you my sincere gratitude for joining me in this reviewing endeavour. I am sure it will be most revealing indeed.

Now, if you haven’t seen or read Bridgerton, you’ll be wondering what on earth is going on with me!

Netflix’s latest fantastic original, based on the novel series by Julia Quinn of the same name, has taken the world by storm. Bridgerton is Jane Austen meets equality meets sex – and I can’t believe they pulled it off.

A period drama for the 21st Century, we follow the social season in which young women try and get themselves a young man to marry. Most of the time, money and status is the foundation for such matches, not love. Young Miss Daphne Bridgerton, played spectacularly by Phoebe Dynevor, is in search of a man she loves. Good luck, you might think. So she and the ridiculously gorgeous (not sorry) Duke of Hastings (Regé-Jean Page) make a pact to pretend to court in order to buy Daphne more time to fall in love. Obviously, the inevitable happens. They fall in love.

There are many hitches along the way, including the fact that the Duke is Daphne’s brother’s friend from Oxford. Tension ensues. The Duke is also majorly troubled and never wants to marry or have children – big problem given he and Miss Bridgerton are annoyingly clearly in love.

With many twists and turns, Bridgerton makes for a really exciting and easy-to-devour series of television. Every character has depth (and lots of sex) and they all somehow intertwine. What brings them together is Lady Whistledown – who I terribly attempted to emulate at the beginning of this review – and her gossip paper in which she spills all secrets about the ton and its ladies and gentlemen. It can be your worst nightmare if you end up in that gossip paper when trying to find a husband. Scandal is always around the corner.

Perhaps my favourite part of Bridgerton is the way in which women are presented. In Jane Austen, they’re usually wickedly smart and strong-willed, never thinking about sex or anything of the sort. Yet Bridgerton takes us to a much darker side and explores affairs, secret rendezvous, same-sex romances and what it means to really be a woman. Daphne’s sister Eloise is the kind of character straight out of an Austen novel – wanting to make her own way in the world. She poignantly says to her brother that whatever he wants to do, he can simply just go on and do it. As a woman, your life depends on your marital status.

This is a very difficult series to talk about without giving everything away, so what I will say is that Bridgerton is worth the watch. Viscount Bridgerton, Daphne’s brother, is also worthy of an honourable mention for his complex and passionate affair with Sienna, a woman of no status in comparison, and his loyalty to his family. It is suspected that the Viscount, played by the also-gorgeous Jonathan Bailey (again, not sorry), will be the subject of series two, announced by Netflix on Thursday.

Bridgerton is dark, heartwarming, touching, vicious and generally just incredibly interesting. Watching people from the infamous ‘Jane Austen period’ interact in ways we have never seen before is an irresistible treat.

From the set to the costume to the music – every inch of the series is perfect and clearly thought-out. The first episode is a little odd and made me feel like I was crazy, but if you get through that first hour, you’re flying. I am obsessed.