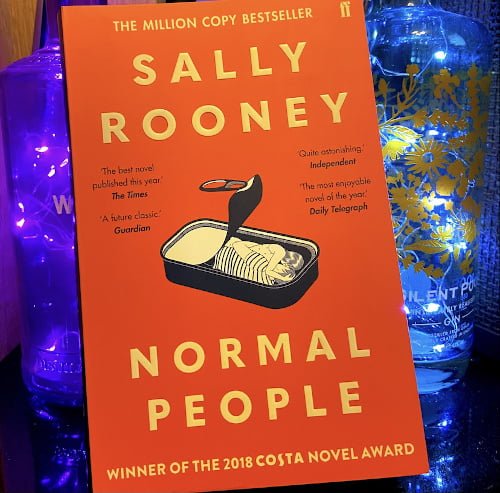 If you’ve ever read a book review by yours truly before, you’ll know it’s rare I award five stars. They are reserved for special works of art – and Sally Rooney’s Normal People is exactly that. In fact, Normal People is a masterpiece.

I first heard of the book when it was broadcast as a series on TV somewhere in the dark days of lockdown. I didn’t watch it because I thought it sounded so good I’d just read the book first. And I am so glad I did that – I came to Normal People with untainted eyes and little knowledge. I left Normal People having both my life changed and my life affirmed.

The novel centres around the lives of two late adolescents Connell and Marianne, both of whom are very intelligent and connect with one another on a deep level. Connell is popular in school among friends, and engages with his friends; Marianne is a loner by choice and engages with nobody really, apart from Connell, who she knows because his mother, Lorraine, is her cleaner. Thus, here’s another dynamic: Marianne is rich and Connell is not. They are two young people drawn together, but who repeatedly try and stop it, or get dragged away from one another.

Connell in school is a bit cruel to Marianne – they have sex, but he won’t look at her in the corridor, or acknowledge that they know one another. Marianne doesn’t attempt this either, but that’s because she knows it would ruin Connell’s ‘reputation’, as he believes himself. They go on like this for a while, then drift apart when they go to the same university. Normal People follows their very formative years spent at Trinity in Dublin, written in a way that makes it incredibly easy to read.

Rooney quite clearly has a gift with her writing. She chooses to do away with the formalities of ‘”I love you,’ he said'”. She simply writes in a continuous style, without quoting speech, just as if she’s writing it all down in a long, thoughtfully-crafted note. It’s hard to describe her style, but it’s brilliant – and it makes for incredibly easy and gripping reading. From the moment I opened Normal People, I couldn’t put it down. I read the whole thing in under a day, refusing to get out of the car at shops and sitting in the car park reading it.

What is so wonderful about this novel is that it’s unabashedly authentic. Every character – especially the posh, arrogant and ignorant ones at university who Connell can’t engage with – are quite easily people you’ve met before. As a young person reading Normal People, everyone is so blisteringly real you have to keep reading. As for Connell and Marianne as characters, there are elements of them that I really didn’t like. And there are also elements of them I loved. I identified with them and also distanced myself from them – but that’s why it’s so real. Only Jane Austen, I’d say, in Pride and Prejudice, is able to capture characters who are also polarising in their personalities so well.

But the point of Normal People is to watch this relationship between two young people, with no idea what they’re doing or where they’re going or what they want, move along the path of life together – including getting into toxic relationships and developing mental illnesses – in one way or another. They date other people, travel abroad, whatever – but somehow, centrally, they always end up where they started: together.

Sally Rooney is a literary genius for this novel, and ever since I finished it, I’ve been going about my days hoping she’s well and having a great life. This book deals with a range of issues – domestic abuse, mental illness and suicide, relationships of all manners, growing up, motherhood (in a sense), loss and love in a way no modern writer has managed to do before.

It’s not trashy young adult fiction, or John Green’s dismal attempt at capturing ‘the youth of today’. No – Sally Rooney was and is one of us, and that’s why she’s been able to write about what it’s like in such extraordinarily accurate detail. She deserves all the praise in the world for Normal People – and if you haven’t read it, start now.