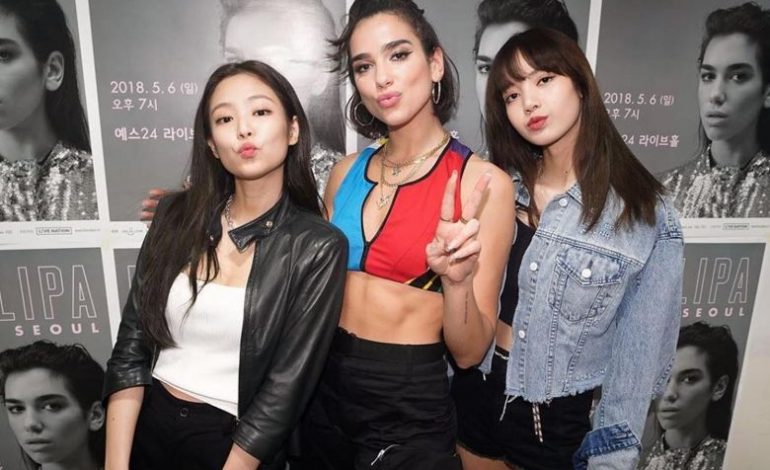 Not sure whether you’ve heard, but K-pop is becoming a worldwide phenomenon, with the likes of BTS making appearances on shows such as Ellen Degeneres, and collaborating with Nicki Minaj. However, this appears to be just the beginning, and we have a 2-for-1 deal for you right here.

First up we have BLACKPINK or BLΛƆKPIИK, an emerging South Korean girl group, teaming up with award-winning British artist Dua Lipa. Mixing Hangul (Korea’s native dialect) and English, this little number is a perfect marriage of pop music from both nations, showing the influence each has on the music industry as a whole:

‘Kiss and Make Up’ combines Lipa’s synthpop vibe with the K-pop girl band’s electronic, hip-hop style sound, and the result is something we can all enjoy. There is definitely something refreshing about this track compared to what we are used to hearing from the regular chart-toppers.

Another collaboration, be it not the first between BTS and Steve Aoki, is ‘Waste it On Me’. Unusually for BTS, they sing all lyrics in English, while maintaining the singing style we would associate with K-pop. The highly influential group, otherwise known as ‘Bangtan Boys’, have been making waves across the world recently. This track definitely makes the best of Aoki and BT’s talents, with an electronic backdrop to the cathartic lyrics:

Both tracks adhere to a similar theme, and, although they focus on love lost, still maintain a hopeful outlook. If they were released earlier in the year, both arguably could have potentially been summer anthems.

Let us know what you thought of these collaborations in the box below.